News that the U.S. Supreme Court unanimously ruled to overturn Massachusetts’ abortion clinic buffer-zone law is welcome by those who respect life all across the country!  Cardinal Sean O’Malley issued a statement hailing the ruling as a free-speech victory for pro-life Americans. He said, “”Clearly this was an attack on pro-life Americans’ freedom of speech, and we welcome the Court’s decision to overturn the law.”

Here are BCI, we are glad to hear the Cardinal voiced his concern about attacks on pro-life American’s freedom of speech. But frankly, he is being a hypocrite. When the Supreme Court makes a ruling to protect the rights of pro-lifers to gather outside of an abortion clinic, there he is front and center with a statement.  Yet, the same Cardinal O’Malley was also front and center honoring one of the worst pro-abortion politicians in the U.S. a month ago at Boston College’s commencement, in direct violation of the USCCB’s own guidelines that say Catholic institutions should not honor pro-abortion politicians.  When was the last time Cardinal O’Malley said a word publicly about the scandal of pro-abortion Catholic politicians?  2007.  Besides being a hypocrite by honoring Kerry last month, he also is apparently violating the Boston Archdiocese’s own Code of Conduct and presiding over a corrupted Code of Conduct violation reporting system.  A Catholic reported the Code of Conduct violation a month ago, and cannot get a response, even though O’Malley himself is quoted as saying they will respond “promptly.”

Below is the Ethicspoint report sent to us by a Catholic reader who says the Code of Conduct is a sham.

The organization does not have any questions or comments at this time.

Please identify the person(s) engaged in this behavior:

Do you suspect or know that a supervisor or management is involved?

Do Not Know / Do Not Wish To Disclose

Is management aware of this problem?

What is the general nature of this matter?

Cardinal O’Malley participated in the honoring of Sec. of State John Kerry at the Boston College commencement on May 19 in violation of both USCCB guidelines and the RCAB’s own Code of

Where did this incident or violation occur?

Monday, May 19 at Boston College

Please provide the specific or approximate time this incident occurred:

How long do you think this problem has been going on?

How did you become aware of this violation?

All over the news media

That Cardinal O’Malley participated in the commencement is obvious here: 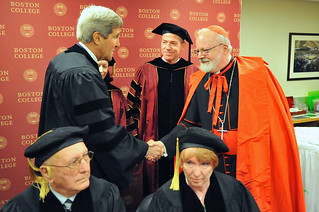 The Code of Conduct says:

All Church Personnel must uphold Christian values and conduct and work diligently to serve and enhance the mission of the Church. This Code provides a set of standards for conduct in certain situations and is designed to deter wrongdoing and to promote honest and ethical conduct.

The public and private conduct of Church Personnel can be a source of inspiration and motivation, but it can also scandalize and undermine the faith of the people that are served. Church Personnel must at all times be aware of the responsibilities that accompany their work. It is essential, therefore, that anyone who undertakes a position of ministry, employment or leadership in the Archdiocese or for any Archdiocesan Affiliated Organization, be ever mindful of the trust that has been placed in him or her. The faithful discharge of the responsibilities that accompany this work requires constant and prayerful reflection since all of us must be sustained by God’s goodness and grace.

Responsibility for adherence to the Code rests with each individual. This responsibility requires all Church Personnel to periodically take a personal inventory. It is hoped that the Code will assist in this task. Church Personnel who disregard or violate this Code will be subject to remedial action. This action can take several forms, from an oral or written warning to removal and termination of employment or services, depending on the nature and circumstances of the offense.

Principles of Ethics and Integrity

As representatives of the Archdiocese or any Archdiocesan Affiliated Organization, and regardless of the pressures inherent in conducting Church affairs, all Church Personnel must act responsibly and in a manner that will reflect favorably on the Archdiocese.

Church Personnel will conduct themselves in a manner that is consistent with the teachings of the Roman Catholic Church as enunciated by the Holy Father and the Bishops in communion with him; more specifically, Church Personnel shall, in all such matters, accept, rely upon and defer to the teaching authority of the Archbishop in all matters of faith and morals.

Affiliated Organization and exemplifies the moral traditions of the Church.

The definition of “integrity” is any of the following:

adherence to moral and ethical principles; soundness of moral character

the quality of being honest and having strong moral principles;moral uprightness.

n. 1. Steadfast adherence to a strict moral or ethical code.

Integrity is a concept of consistency of actions, values, methods, measures, principles, expectations, and outcomes.

Cardinal O’Malley chose to boycott the BC commencement in 2013 that was honoring Irish Prime Minister Enda Kenney for his support of pro-abortion legislation because of USCCB guidelines that that say “the Catholic community and Catholic institutions should not honor those who act in defiance of our fundamental moral principles. They should not be given awards, honors or platforms which would suggest support for their actions.” He made a public statement to that effect.

Then comes along John Kerry in 2014. Secretary Kerry is a  supporter of legal abortion, the public funding of abortion, partial  birth abortion, abortions at military hospitals and buffer zones  limiting free speech around abortion clinics. He has also endorsed  contraception, cloning, embryonic stem cell research, physician  assisted suicide, same gender marriage, federal gay rights  legislation, the distribution of condoms to minors, family planning  programs as part of U.S. foreign aid, and taxpayer financing of both  Planned Parenthood and the U. N. Fund for Population Activities.  As a U.S. Senator, Kerry received a 100% rating from NARAL Pro- Choice America. As a presidential candidate in 2004, Kerry was  endorsed by the Planned Parenthood Action Fund, and promised,  if elected, to appoint only those jurists who agree with Roe v. Wade  to the U.S. Supreme Court, effectively disenfranchising believing  Catholics from high judicial office. Kerry, in August, 2003, attacked  Pope, now Saint John Paul II in the the Boston Herald. Kerry  accused the recently canonized pontiff of “crossing the line,” of  violating the American separation of church and state because of a  Vatican exhortation to Catholic political leaders to oppose same  gender marriage. For 30 years, John Kerry has in total support for  Planned Parenthood and NARAL.

That Cardinal O’Malley ignored USCCB guidelines in 2014 to  Honor Sec. of State John Kerry, who unarguably has committed far  worse in defiance of our fundamental moral principles than Enda  Kenney violates many principles of the Code of Conduct:

This conduct scandalizes and undermines the faith of the people  that are served. If the Cardinal Archbishop of Boston participates in  honoring on of the Catholics in political life in the U.S. who is most  defiant against our moral values, how is that not scandal and how  does that undermine the faith of Catholics served. If the Chair of  the Pro-Life Committee of the USCCB cannot uphold USCCB  guidelines that scandalizes the faithful.

This conduct demonstrates a low Christian ethical standard and a complete absence of integrity—there is no consistency of actions and values (even from one year to the next), and Cardinal O’Malley  has undermined Catholic moral values to millions of Catholics in  Boston and hundreds of millions worldwide.

The Code of conduct says those who violate it may be warned or may face removal and termination of employment or services, depending on the nature and circumstances of the offense. I  would like to hear specifically what repercussions are ordered  against Cardinal O’Malley.

It’s been about two weeks since I filed my report of misconduct. When can I expect to get a response?

Is anyone ever going to respond? Or shall I tell some of the Catholic blogs that the Ethicspoint program and Code of Conduct is nothing but a sham?

BCI will forward this post to the Cardinal.  We urge other readers to do that same. You can send it to the following people:

Ask how the Cardinal can justify his actions. Let us know if you get any response

This entry was posted on Friday, June 27th, 2014 at 3:38 pm and is filed under Uncategorized. You can follow any responses to this entry through the RSS 2.0 feed. Both comments and pings are currently closed.