A lot of folks are confused about the folktales being told about the new 401K plan for lay archdiocesan employees. Hopefully, this post will help the benefits folks at 66 Brooks do a little better job of explaining things than they have done up to now, for the benefit of the folks who will rely on these benefits in the future.

One source of angst and confusion has concerned the listing of funds in the August mailing to archdiocesan employees. The letter sent to folks  gave a list of funds that included a number that were load funds. Because there was nothing in the letter to employees and supporting materials that suggested otherwise, folks naturally assumed that they were getting stuck with front-end fees, which go to the brokers that sell the fund shares and thus reduce the amount of your investment.  Here is a list of the funds at catholicbenefits.org, which is a slightly updated version of what was sent to folks in the mail in August: 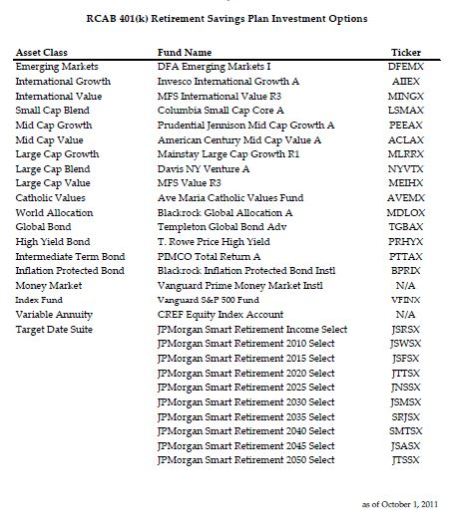 It did not take much for folks to start looking up the investment options and find that funds like AIIEX, LSMAX, PEEAX, ACLAX and others charge front-end loads of up to 5.75%.  Who wants sales commissions taken right off the top that reduce the amount of your retirement investment?

Many load funds waive their loads for purchases of fund shares through 401K retirement plans, but since there was no mention in the communication from the archdiocese that the loads were being waived with this plan, folks understandably started to get a bit stirred up.

Now, in the most recent edition of The Pilot, Carol Gustavson, director of benefits trust and plan administrator, says there will be no front-loaded fees or sales charges on mutual funds offered in the package.  If indeed that applies to all of the funds, that is a good thing.  But, assuming that is the case, why was this not communicated up-front in the original mailing two months ago? Must folks subscribe to the The Pilot or attend a meeting in order to learn critical details like this? If it is true that the published load fees are being waived, why is this important information still nowhere to be found on the Benefits Trust website?

Last BCI heard, the person managing this important program is paid  about $150K/year and her multi-millionaire boss who has executive-level oversight for this area is paid $250K/year. These excessive salaries relative to other dioceses take a few hundred $K annually away from ministry programs.  Is it too much to hope and expect that for these excessive salaries, the so-called  “best and brightest” could put together a complete set of materials about the program and utilize the cost of printing and mailing effectively to communicate the critical details of the 401K program?

If the folks at 66 Brooks who are telling 401K folktales would like to email us when they have officially posted and communicated the provisions regarding the waiver of load fees, BCI will be glad to notify our readers.

As most readers know by now, just about the only way to

get the Archdiocese of Boston to take action these days on anything is some sort of big threat or pressure.  These threats and pressures can take one of 3 forms: a) bad publicity, b) loss of money, or c) a lawsuit.  Today we talk about a lawsuit recently filed which many people might want to know about.

The cuts to the employee pension plan announced last fall that affect current and former diocesan employees as well as employees at affiliated organizations are getting a lot of attention of late.  Many dedicated former employees feel the communications from the archdiocese are intended to coerce them into accepting a lump-sum payment because of the uncertainty of the future funding status of the plan. We have copies of the letter we will post soon and agree it seems like coercion.

As part of our research to help readers prepare for the upcoming information sessions–including one Thursday night at the Pastoral Center in Braintree–the other day we were reading some of the information at the archdiocese’s glitzy benefits website, CatholicBenefits.org when we happened upon the pension plan financial statements from 2010 and 2009.

Check out this link to download the RCAB Pension Plan Audited FY 2010 Financials.  It was amended and released in mid-January 2011 with little public attention. Go to Page 13, note J for information about one entity whose funds have been managed by the RCAB that has filed a legal complaint to get their funds out.  Here is what it says:

During December 2010, a Complaint for Equitable Relief and an Accounting was brought against the Plan’s Trustees by the Daughters of St. Paul, a participating entity in the Plan. The entity is seeking a transfer of the assets and liabilities allocable to it relative to its current and former employees who have been participants in the Plan. Prior to agreement to the transfer of assets and assumption of liabilities by a new plan to be created by the participating entity, the Trustees of the Plan have sought assurances from the participating entity that will provide sufficient protection of pension plan benefits to the respective participants. It is the Trustees’ estimate that the nature of the legal action, which primarily seeks equitable action as opposed to monetary damages, will not materially and adversely impact the Plan. The Trustees hope to engage in discussions promptly to try to reach closure regarding the transfer of the pension plan assets of the Trust to the Daughters of St. Paul, on conditions, at a value, and with accounting and actuarial information satisfactory to both parties.

We did not let the Daughters of St. Paul know we learned about this lawsuit or seek permission from them or anyone to share news of this legal action since this published information is sitting right out there in the public domain.  Sources indicate to us that the Daughters tried to solve this problem by meeting with various archdiocesan officials, but the archdiocese was uncooperative and confrontational in the negotiations.

We cannot blame them for taking legal action. Very big of the archdiocese to respond back saying they want assurances from the Daughters that they will provide sufficient protection of pension plan benefits to their participants, when the archdiocese itself makes no assurances to its own participants they will provide sufficient protection of benefits. The Daughters run their own publishing business, they operate a chain of retail bookstores, they have their own recording studio, and more. They have never struck BCI as not being business-savvy, so BCI has little doubt they will be able to work out appropriate investments to ensure benefits are protected for their current and former employees.

Still, Jim McDonough, Carol Gustavson and the archdiocese should really be ashamed that people have to resort to lawsuits in order to protect themselves.

For example, here is the 67-page document outlining all of the terms of the 2011 RCAB Pension Plan and Trust. Go to p.64 in the .pdf (numbered page 59) and look at the approval/signature page.  Even easier, just click on the graphic below.

In case people want to know, here are the names of the anonymous trustees.

None of them apparently is sufficiently proud of the plan and their handiwork to sign their names to a single memo or plan document.  Thanks, guys.

Let us know what you think about the lawsuit and practice of never listing the names of the trustees who are supposed to be protecting the best interests of plan beneficiaries.

And stay tuned tomorrow morning (Thursday) for a list of questions to ask at Thursday night’s meeting in Braintree.