Boston Globe Gets it Wrong…Again

NOTE: The blog post originally published at 9:30am has been updated as of 12pm today.

We will have more for you on the new Catholic Schools policy in a separate post.  But in case you saw the headline in today’s Boston Globe about the appointment of Fr. Christopher Coyne to an episcopal position in Indianapolis, we wanted to let you know the Globe got the news wrong, yet again.  That is, they got it wrong until BCI corrected them.

“Coyne’s main mission will simply be to help Indianapolis Archbishop Daniel M. Buechlein carry out his duties. He will carry the load of the sacramental duties — like priest ordinations and confirmations — the archbishop typically performs in the large archdiocese that covers 14,000 square miles in 39 counties. Coyne also assumes the role of vicar general, which essentially is the No. 2 administrative post.  Buechlein, who turns 73 in April, has been on a reduced schedule since 2008, when he was diagnosed with Hodgkin’s disease, a cancer of the lymph nodes. That cancer is now in remission, church spokesman Greg Otolski said Thursday.

Today’s appointment came with no guarantee that Coyne could become archbishop of the Archdiocese of Indianapolis…Buechlein said he asked the pope for a co-adjutor, or assistant, but he chose to designate an auxiliary bishop.”

Yet despite that clarity, the headline of today’s Boston Globe article in the print edition reads, “Coyne to lead Indianapolis Archdiocese.”  It read the same way online as of 9:30am when we put out our post criticizing their mistake.  Keep reading to see the before and after. 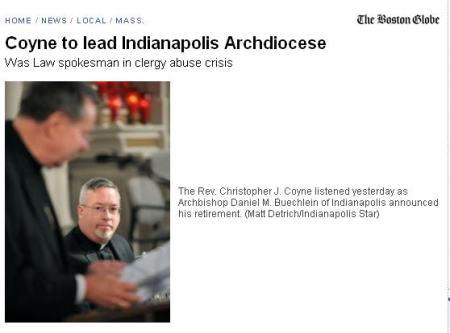 That is simply inaccurate.  The photo caption says, “The Rev. Christopher J. Coyne listened yesterday as Archbishop Daniel M. Buechlein of Indianapolis announced his retirement.”  That is wrong–Archbishop Buechlein did not announce his retirement at all.  The title tag on the page (in the blue bar at the very top of the browser) says, “Spokesman for Cardinal Law to lead Indianapolis Catholics.”  That is wrong too.

Might auxiliary bishop-designate Coyne be well-positioned to become the bishop of Indianapolis in the future when the current archbishop of Indianapolis retires?  Sure.  But that is not assured, and he was simply appointed auxiliary bishop at this time.  Often times, the people who write the articles (e.g. Lisa Wangsness at the Globe, in this case) are not the same people who write the headlines, so we do not fault the reporter.  But we felt we should let you know about the error, because if we or our readers tell the Globe about the error, they are not likely to listen to us.

12pm UPDATE: Well, the Globe did listen to us in this case!  The headline of the article and photo caption are now changed as you can see below.

This shows that at least in this case, when the Globe sees something is objectively wrong, they are able to report the truth.

This brings us to three other related points.

First about the Boston Globe.  For some reason, the Globe seems to be totally ignoring the Boston Catholic Insider blog these past few months (except this morning!) and the breaches of fiscal responsibility and corruption we keep reporting on. In previous years and in other metropolitan areas, if there were serious allegations of corruption or breaches of fiscal responsibility like this, it would merit an investigation and probably be headline news, like the cronyism and misconduct in the Massachusetts Probation Department have been here lately.  Not the case with the corruption in the Archdiocese of Boston.  Seems as though the Globe must get exclusive rights or first access to the pablum handed out by Terry Donilon and Jack Connors–about the Catholic schools (fund-raising, increasing appeal to non-Catholics, the new Catholic Schools non-discrimination policy) or the personal good works of the Cardinal (e.g. visit to Pine Street Inn, visit to a prison), or the “dialogue” with the vigil parishes–and in exchange, the Globe simply will keep their heads in the sand and not write about the fiscal mismanagement, breaches of fiduciary responsibility, conflicts of interest, and other corruption that squander millions of dollars in donor contributions and could result in government sanctions some day.  If it makes Terry, Jack or the current leadership of the archdiocese look bad, the Globe is simply not likely to report on it today.

Secondly, this news about Fr. Chris Coyne being appointed auxiliary bishop/Vicar General/#2 in Indianapolis should cause everyone to ask about what is happening with the leadership in Boston.  Vicar General Fr. Richard Erikson is rumored to be heading back to full-time duty with the Air Force within a few months.  What attributes should the Cardinal look for in his next Vicar General?  What is happening with the future of the Chancellor? That will be the topic for a different post.

Thirdly, it is noteworthy that when the Archbishop of Indianapolis felt that he could not lead effectively, he asked the pope for help.  And the pope responded.  Food for thought..

In the meantime, we extend our heartiest congratulations to Fr. Chris Coyne on his elevation to auxiliary bishop.  Here is a 2-minute video clip of the introduction of Fr. Coyne in Indianapolis we thought you would find of interest. The loss for Boston is a gain for Indianapolis.  We hear he has been an outstanding pastor at St. Margaret Mary in Westwood and we wish him well in his new assignment.

Comments Off on Boston Globe Gets it Wrong…Again |