Today we are taking a brief break from big topics like archdiocesan finances and the departure of the Chancellor.

Amidst the attention last week on St. Cecilia Church in Boston around the funeral of the late Boston mayor, Kevin White, BCI noticed an intriguing exchange in comments over what happened to a statue of Jesus Christ crucified on the cross with 3 figures at the foot of the cross.  Before St. Cecilia undertook their recent renovation, the statues were outside of the church. They were removed to make way for a handicapped ramp, but now that $18-20 million dollar renovation project is done, for some reason the statues have never been reinstalled.

BCI loves beautiful churches, so when a church does any form of renovation–or preferably, a restoration–we often are delighted to see how the original beauty of the church is restored. It is great to see layers of paint removed to reveal hidden paintings or artwork below, and to see older statues, stained glass, murals, decorative paintings, gold leaf, and marble restored to their original beauty. But when religious articles are removed, BCI thinks people should be asking questions about why that has been done.

That is apparently the case with St. Cecilia’s in Boston. We will call this the “Case of the Missing Statue.”

Before the big $18-20M renovation and restoration project at St. Cecilia, the statue of Jesus Christ crucified on the cross with 3 people at the foot of the cross served as a wonderful reminder to all who passed about how Christ died to save us from our sins.

Below are photos BCI obtained of the statue during 2010 construction. 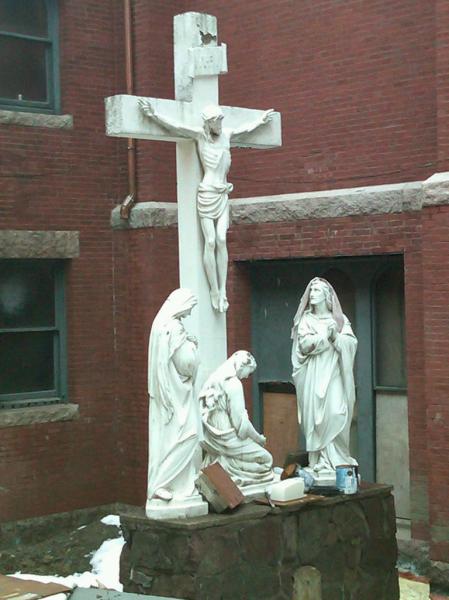 Nearby at the time, was this sign, “Respect this Sacred Space.”

A handicapped ramp has now been installed in this same area, and even though there is plenty of room for the statue, as you can see below, the statue is gone.

UPDATE: the picture below has been added thanks to a BCI reader who recently snapped a picture from the street level. 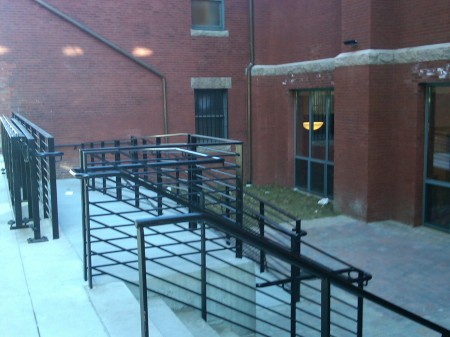 On the other side of the church, where the old parish hall used to be (20 Belvidere Street) before it was demolished, is a new glass entryway and a courtyard.  See below for the before and after pictures. 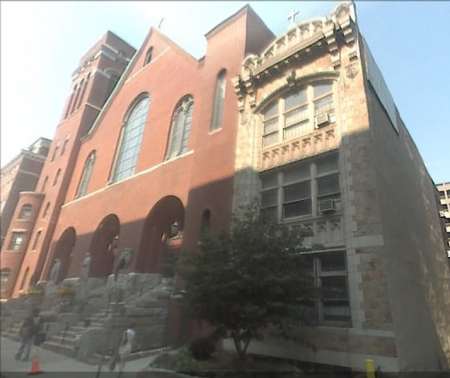 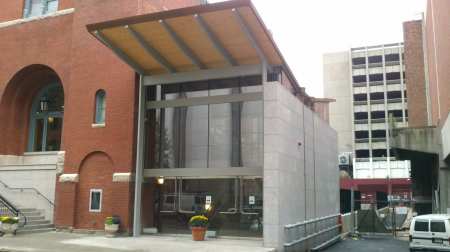 St. Cecilia new courtyard (view from back side)

Notice in the above photos how the statue is not on this side of the church either.

In response to a question about the statue, reader “GGT” commented, “the statues you refer to have gone bye-bye.”  Indeed, it appears from these photos and a visit by several members of the BCI team, that the statues have gone “bye-bye.”

BCI is not sure what the explanation is for this. Perhaps the statues were in poor condition and needed to be restored or replaced. Maybe it is planned that they will be returned. The church reopened in December of 2010 after the interior renovations, and construction continued in 2011 on the attached rectory and redesign of the lower church into their parish center complex. That is all basically complete as best as BCI can determine.

For a renovation of any church–let alone one that cost in the range of $18 to 20 million–BCI believes the least that should be expected is that statues which symbolize the saving mission of Jesus Christ should not be permanently removed. If any readers know of a plan to re-install these statues at St. Cecilia and BCI is unaware of that plan, please let us know and we will issue a correction.

With Lent close at hand, BCI hopes St. Cecilia will find a way to restore and re-install these statues (or equivalent ones) depicting this same crucifixion scene in a prominent outdoor location where they can be seen by both Catholic faithful and non-Catholics.  One never knows when such a statue will inspire or convert even one person to a deeper appreciation for the suffering of Christ or to a deeper relationship with Jesus Christ.

ps. We will return to a deeper analysis of the archdiocesan finances, including the growing number of people earning $150K+ salaries, during the coming week.

This entry was posted on Sunday, February 5th, 2012 at 4:40 pm and is filed under Archdiocese of Boston. You can follow any responses to this entry through the RSS 2.0 feed. Both comments and pings are currently closed.