The “ad limina” visit to the Vatican by the northeastern regional bishops is off and running, and BCI finds it interesting and ironic that Cardinal O’Malley started things out by saying he hoped that being together at the tomb of Peter would renew him and his fellow bishops “in our generosity, courage and faith.”

Sounds good at first and BCI would encourage all of our readers to also pray for generosity, courage and faith for our bishops.  But BCI and our readers are wondering how that courage thing is going in recent years for Cardinal O’Malley, since a lot of faithful Catholics in Boston have been looking for more in that particular department.  As St. Anthony of Padua said, “Actions speak louder than words, let your words teach and your actions speak.” 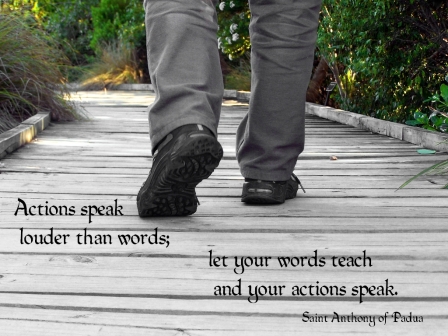 Here is most of the CNS story reporting on this:

Bishops from northeastern US begin ‘ad limina’ visits with prayer

VATICAN CITY (CNS) — Praying together at the tombs of the Apostles Peter and Paul and meeting Pope Benedict XVI should be a moment for bishops to reconfirm and strengthen their faith, said Cardinal Sean P. O’Malley of Boston.

The cardinal was the principal celebrant and homilist at a Mass Nov. 4 in the grotto of St. Peter’s Basilica in a chapel before the saint’s tomb.

In his homily, the cardinal told his fellow bishops that after Jesus’ arrest in the garden of Gethsemane, “Peter flees. He’s trying to follow the Lord at a safe distance, something we all try to do at one time or another. But Peter discovers it’s impossible; you can only follow the Lord up close.”

After the Resurrection, Jesus asks Peter three times if he loves him, because love is the measure of faith, the cardinal said.

“Jesus doesn’t ask Peter if he’s excelled in his intellectual prowess or his organization skills or his fundraising capacity or his Myers-Briggs score. Jesus only asks, ‘Do you love me?'” he said.

Peter’s love for the Lord brought him to Rome, the cardinal said, but — according to legend — as persecution grew Peter decided to flee again. Leaving the city, he saw the risen Lord and asked him, “Quo vadis?” (“Where are you going?”), and Jesus replied he was going to Rome to be crucified again. Peter renewed his faith and returned to the city where he met a martyr’s death.

“Each of us has gone through a ‘quo vadis’ moment or two in our vocation as bishops,” the cardinal said. “Hopefully, our being together at the tomb of Peter and close to Benedict will renew us in our generosity, courage and faith in following Jesus up close so that we can say with all our hearts what Peter said, ‘Lord you know all things. You know that I love you.'”

If we bring this back to Boston for a moment, it is impossible to not observe that the words of Cardinal O’Malley a few days ago in Rome are not particularly well matched to his actual actions and leadership over recent years.  Perhaps it is that he has had a lot more than just one or two “quo vadis” moments.  When has our Cardinal Archbishop “fled” or not demonstrated courage?  Here are a few examples:

It is good that the Cardinal is praying for more courage, and we would urge readers to join with him in that prayer!  At the same time, it is not clear to us if he understands and acknowledges his actions have often not been matched with his words and where he has fallen short so he can do better in the future.

This is just a quickly drafted list BCI came up with of ten areas where the Cardinal could have demonstrated stronger courage and faith, where faithful Catholics may have wanted to see him demonstrate greater courage. What else do you think we have missed?

This entry was posted on Sunday, November 6th, 2011 at 1:11 pm and is filed under ad limina visit, Archdiocese of Boston, Cardinal Sean o'malley. You can follow any responses to this entry through the RSS 2.0 feed. Both comments and pings are currently closed.