Both the Boston Herald and Boston Globe had feature articles today about the Archdiocese of Boston. More specifically, the Herald ran several pieces about the “Catholics Come Home” initiative, and the Globe wrote about the visitation by Cardinal O’Malley to Ireland.  Here are a few excerpts from the Herald articles and a short video clip that BCI felt everyone should see.  The Globe article excerpt is in a separate post.

The Boston Archdiocese’s largest effort in a generation to reach lapsed Catholics is drawing wandering souls back to the church’s open arms, but the biggest obstacle could be keeping them, priests and parishioners say.

The archdiocese, still suffering fallout from the clergy sex abuse crisis and parish closings, is hoping to bring back thousands of the formerly faithful through Catholics Come Home, a series of TV ads airing during Lent, coupled with a grass-roots push at parishes.

With two weeks left in the campaign, there is evidence it’s working.

“I was doing laundry and that stopped me in my tracks, that made me cry,” said Jackeline Rolon, 36, who was so moved by one of the TV ads she started going to Mass at St. Stephen’s in Framingham. She stopped going to church when she was 15. But the ad drew a flood of memories of her grandma, who walked her to church every Sunday in her native Puerto Rico, and her late father, a devout Catholic.

The most visible components of the $600,000 campaign are the emotional TV ads, lasting up to two minutes and reaching 95 percent of Boston-area TV viewers.

Inside church walls, priests and parishioners are ushering in greeters, welcome tables and a new spirit of acceptance. Parishioners are encouraged to bring a friend or relative who has fallen away.

“Before we just waited for the people to come to the church. Now we see a lot aren’t coming. It behooves us to reach out to them and tell them we want them to be part of our family,” Cardinal Sean O’Malley told the Herald. “My hope is that this effort will help our Catholics to feel more responsible to invite, to welcome, to be an evangelical community.”

Parish priests and staff interviewed for this story say they are seeing new faces at Mass, increases in baptism requests and more people in confessional booths after long lapses.

The Rev. Francisco Anzoategui, believes as many as 20 people have come back to St. Stephen’s.

“You’ll be amazed how many people return because they are just waiting for an invitation to come back. It’s happening,” he said.

Kristopher Spanks, 22, who was sickened by the clergy abuse crisis, has started attending Mass again.

He stopped going three years ago and was skeptical when his brother recently asked him to join him at St. Michael’s in North Andover. “It brought back feelings, nostalgia,” said Spanks, who went to Catholic school. “It feels really good.”

“I missed the familiarity of going into the church and sitting there and it’s an overall feeling of warmth and comfort,” said Conlon who came to St. Patrick’s last month at the suggestion of a parishioner. “I can be in my darkest gloom and I would go and come out . . . hoping.”

The second Herald article, “Religious campaign goes beyond  TV ads” gives examples of how some parishes are conducting their outreach:

At St. Michael’s in North Andover, greeters welcome parishioners at Mass. A welcome table has a locked box for those who want to drop a confidential question to a priest. A brochure called We Miss You is going “like hotcakes,” said Donna O’Brien, coordinator of evangelization. “We’ve made efforts to make people feel welcome, to make people feel they can walk into this church at any time and be met with openness.”

At St. Patrick’s in Stoneham, the Rev. Bill Schmidt held a three-night Lenten mission last month for current and lapsed Catholics. About 60 people attended a Q&A night to learn about the faith. Another 50 came to a session on annulments. Parishioners are encouraged to bring friends and family. “We are putting a big push on people to invite somebody to go back,” he said. “It’s always easier to come back with someone.”

At Holy Name in West Roxbury, a letter went out to every parishioner encouraging them to bring a friend to church. At each Mass, the Rev. George F. Carlson welcomes those who have been away. “We are happy you are here,” he says

The chart to the right, found in that second Herald 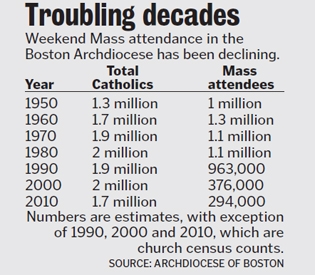 article, presents some interesting statistics.  The Boston archdiocese has referred to there being about 2 million Catholics in the archdiocese for the past 40 years, and the percentage of Catholics attending Mass has been reported as a percentage of 2 million.  When 294,000 is divided by 2,000,000, that means only 14.7% of Catholics are attending Mass. But now it is reportedly down to 1.7 million Catholics in Boston, a decline seen over the course of the last 5-6 years.

At the same time we wish to bring Catholics back “home,” we wonder who is asking and answering a key question here:  What has caused Catholics in Boston to drift or purposely walk away from the Catholic faith and the Catholic Church in such large numbers? It seems that the most precipitious drop had already occurred between 1990 and 2000, before the sexual abuse crisis hit, so it cannot be attributed to that alone.

What do you think has happened? Even more importantly, beyond TV advertising (which, based on the moving testimony by Jackeline Rolon, is obviously having some positive impact), what else do you think should be done about this?

This entry was posted on Sunday, April 10th, 2011 at 5:15 pm and is filed under Archdiocese of Boston. You can follow any responses to this entry through the RSS 2.0 feed. Both comments and pings are currently closed.

13 Responses to Archdicoese in the News: Catholics Come Home