Dictionary.com defines “fraud” as “deceit, trickery, sharp practice, or breach of confidence, perpetrated for profit or to gain some unfair or dishonest advantage.”

For those following the saga of how the Archdiocese of Boston is cutting promised pension benefits to former employees and religious, we may now have a new word to use in discussing what is going on.  We are not sure what the answer to the question in the title is, but are just posing the question for consideration.  You decide.

Here is the situation in a nutshell:

The archdiocese promised certain benefits to employees when they were hired, and the Archbishop of Boston also promised that when parishes were closed and sold, the funds from property sales would pay off employee pension obligations, among other debts and obligations.  But today, some six years after parishes were closed, even though $5M exists in unpaid pension obligations from closed parishes that has never been paid back, instead of tapping the closed parish “reconfiguration funds” to pay off the debt as promised, the archdiocese is sticking it to former employees by cutting their pension benefits.  Worse than that, even as the archdiocese is cutting pension benefits saying they do not have the money to pay them, $2.5M from those closed parish reconfiguration funds was siphoned off from reconfiguration funds to pay for powerbroker Finance Council member Jack Connors’ pet school project in Brockton instead of going to pay back the pension funds.

Take a moment to re-read the first sentence of this blog post.

There is so much to say about events of the past few days, including the meeting at the Pastoral Center last night with former employees, that time simply does not permit a full discussion today.  Here are just two highlights, and the basis for the subject of this blog post.

1) Despite initial promises made to employees about pension benefits when they started working for the archdiocese, Carol Gustavson, the plan administrator, repeated last night that if former employees do not take their lump-sum payments now, there is no guarantee they will get their money later.

We all know by now, of course, that it is a conscious choice and decision by the archdiocese and plan trustees to not uphold the prior commitments, while still choosing to pay millions of dollars in excessive six-figure salaries to multi-millionaire employees. By the way, no one seems to mention that there is approximately $1 billion in real estate assets on the books, which the Chancellor and archdiocese seem perfectly content to sell off when they need the money for certain other things, but not for funding pension plan obligations.  So much for good faith in prior promises made by the Archdiocese of Boston.

2) A question asked last night deserves immediate investigation by the archdiocese and by legal authorities.  Why has the 2004 promise by the Archbishop of Boston that reconfiguration funds from parish closings would be used to payoff parish debts not been honored to retire $5 million owed by closed parishes towards the pension fund?

Here is the promise, which we first wrote about in our September 22, 2010 post,  Moving Money, Building Distrust. You will find the promise made twice.  See page 4-7 of this document distributed at the March 2006 Archdiocesan Pastoral Council meeting, presided over by Cardinal Sean O’Malley.  Note how the document coincidentally opens on page 1, “Communication Builds Trust.”:

Here is a graphic of the same passage:

If you keep reading in the .pdf, you will see a second letter, dated July 24, on pages 6-7 that reiterates the promise:

“The funds raised from the sale of suppressed properties will be used to address past due obligations and employee benefits of the suppressed parishes, including:

1. Monies due employees of suppressed parishes for past work and separation assistance;

2. For vendors who are owed monies from suppressed parishes;

3. For amounts for past employee benefits and parish insurance due from suppressed parishes;.

4. For covering unfunded pension liability for lay employees and clergy of all parishes

Promise was clear.  Was it upheld?  No. 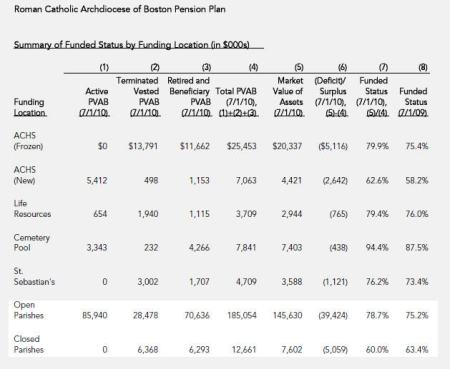 Despite that $5M debt to the pension plans from closed parishes, in the 2008 annual report we see this:

“On August 13, 2007 as part of the parish reconfiguration process $2.5 million was transferred to Trinity Catholic Academy Brockton, Inc.”  a newly formed related organization that consolidated the operations of certain parish schools in Brockton.”

We asked this last September and will ask it again.  How did Jack Connors’ new Catholic Schools project magically become part of the previous “parish reconfiguration process”?

How is it that funds originally promised by the Archbishop to parishes, employee benefits, and the unfunded employee pensions were instead redirected to the Brockton project?

Then of course in 2009, when the Campaign for Catholic Schools, Inc., another separate but “related” corporate entity, needed cash to pay construction bills, somehow $26 million in Revolving Loan funds–some of which probably came through the revolving door from Reconfiguration–revolved right back out the door to Jack Connors’ pet project.  We keep going through the list of promised usages for reconfiguration funds and must be missing something.  Can anyone point out how building new non-parish-affiliated archdiocesan Catholic academies by a different but “related” corporation fits into the list of priorities above the promise to repay unfunded pension plan obligations?

And  where exactly did the gain of about $40 million from sale of properties reported back in the 2006 Annual Report and  2006 audited results go after the Revolving Loan Fund was paid-back $14 million?

Dictionary.com defines  “fraud” as “deceit, trickery, sharp practice, or breach of confidence, perpetrated for profit or to gain some unfair or dishonest advantage.”

Objective reality from their own actuarial statements is that $45 million of the funding shortfall is actually owed by open and closed parishes, but former employees are being coerced into taking the hit in their pockets to let the archdicose off the hook.  This paves the way for a new fully-funded plan in the future for everyone making six-figure salaries currently working at 66 Brooks Drive.

Do the actions of the Archdiocese of Boston correspond to the practices in the dictionary definition of “fraud”?  We are just asking the question.  What do you think?

This entry was posted on Friday, March 11th, 2011 at 6:31 pm and is filed under Pension Fund. You can follow any responses to this entry through the RSS 2.0 feed. Both comments and pings are currently closed.