In today’s episode of the “Seminary Squeezola” (about how both the Boston Archdiocesean leadership and Boston College have been inhibiting the ability of St. Johns Seminary from being more prosperous), we discuss the expansion plans BC has for their new “Brighton Campus” and we share via pictures what the squeezola actually looks like.

For new readers, in our first exciting episode, St Johns Seminary “Squeezola”, we reported on how Boston College is encroaching on the limited space left for St. John’s Seminary. In our second episode, The 2007 Sale of Property to BC, we gave some of the history of the 2004 and 2007 sales, and how the archdiocese–and specifically Cardinal O’Malley, Chancellor McDonough, Vicar General Fr. Richard Erikson who serve on the seminary board–disregarded the recommendations of the Vatican’s apostolic visitation committee that no more property from SJS be sold. In our third episode, Chancellor Conflict of Interest and Money Grab we reported on the money grab for the seminary assets and conflicts of interest by Archdiocesan Chancellor Jim McDonough and other archdiocesan leaders.

For posterity sake, we invite you to briefly take a look at some of the history of the St. Johns Seminary campus.  According to the SJS website, in March of 1880, Archbishop Williams acquired the 50 acre Stanwood estate, near the present day Lake Street in Brighton, for around $18,500.  As you know, all of that land was sold to Boston College in 2004 and 2007. If you want to learn more about the development of the buildings on the property and architecture, the Brighton Allston Historical Society has an interesting overview.

Here is what the St. Johns Seminary map used to look like before the Archdicoese sold off all of their land:

Walk about the former seminary grounds today and it all looks basically like it did a few years ago before it was sold, except for the addition of some emergency phones, signage, and the young coeds now walking around. But this belies the plans ahead.

First off, here is what the BC “Brighton Campus”  map looks like today. 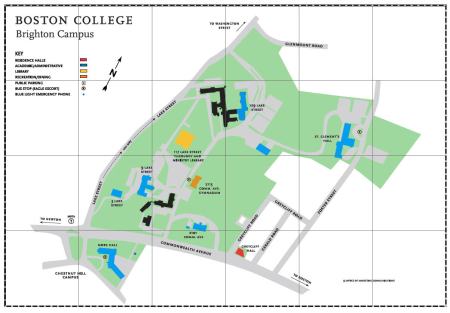 The initial plans for the Brighton Campus were announced in December 2007 by BC, as part of their  $800M 10-Year Master Plan (later $1B), which also included plans for the main campus.  The Brighton Campus plan got pared back a fair amount after review by the Boston Redevelopment Authority by the time it was approved in early 2009.

Here are highlights  from their original 2007 plan for the Brighton Campus:

In January of 2009, the plan was approved, with a number of modifications.  Here are the highlights of the changes:

Here’s a 2006 rendition of what the proposed athletic fields would look like (though in the 2009 revisions, the orientation was changed) 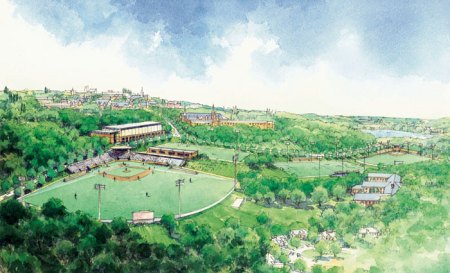 Brighton Fields | A view to the southwest from above property adjoining Brighton Campus. A set of playing fields stretches from the near left to the near right, ending at Lake Street. The new building in the middle distance is a combination racquet center and parking garage. The campus of St. John’s Seminary is in the middle distance at center.

Work has now begun. Walk past the former Bishop Peterson Hall and you will see scaffolding outside. The building used to have classrooms, administrative offices and dorm rooms for the seminarians.

What is BC planning to use the former Peterson Hall for?   According to this September 10, 2010 Boston Globe article, “Once the Lake Street renovations are complete, the college’s human resource employees from More Hall will move there.”

There are more than a few things that we do not understand.  The biggest one is why BC is saying they need to use the St Johns Seminary Chapel are part of the negotition over the dorm rooms SJS would like to acquire back.  There is a perfectly fine spacious chapel BC owns in the former Peterson Hall building and they are apparently planning to gut (or are already gutting) so they can use the space for some other purpose.  How demanding could the office requirements for HR employees who are right now comfortably working in another building possibly be?  BC also got a chapel in the former St. Clements Hall building and another smaller one in the former St. Williams Hall building.  They bought 3 buildings with chapels, and need to further encroach on our seminary to use their chapel?  Does anyone else think this is preposterous?

Beyond the matter of the chapel, although it is “water over the dam” at this point, just out of curiosity, was the property sold to BC in 2004 and 2007 ever even put up for sale by the archdiocese via an open request for proposal (RFP) and open bidding process?  Could anyone who wanted to submit a proposal for consideration, or was BC the only bidder allowed?

Why is BC’s further encroachment on the seminary tolerated?  Don’t the growing numbers of seminarians and expansion of the SJS programs speak volumes?  Why isn’t Cardinal O’Malley trying to “buy back” the former Peterson Hall so the seminary’s growth has someplace to go?  Whose advice is he listening to regarding the future of the seminary?

So many questions.  So few answers.  Stay tuned for more in our next exciting episode of Seminary Squeezola.

ps. Odds now favor the announcement of Kathleen Driscoll as the new secretary for institutional advancement next Tuesday, Election Day, so it will get the least amount of press coverage possible.

This entry was posted on Thursday, October 28th, 2010 at 9:14 pm and is filed under Cardinal Sean o'malley, seminary. You can follow any responses to this entry through the RSS 2.0 feed. Both comments and pings are currently closed.